Lead generation typically involves giving a prospect a free resource in exchange for their email address and the chance to ply them with arguments as to why they should become a customer of yours.

For the Ageless Brain promotion I ended up creating three of the resources we use as lead magnets.

Of those three, only the last one I am about to discuss directly focused on an aspect of brain health that would be immediately recognizable as such. The first two deal with coffee breaks and bone loss.

The question is, why choose to focus on those topics? Because on the surface it doesn’t seem to make a whole lot of sense.

However… When you factor in just who the intended audience is for each of these lead magnets my choice of topic should start to seem a little less crazy.

So let’s take a brief look at the story behind each of these resources – how they came to be, and what went into creating them.

The theme of one the first resources offered as a lead magnet for Ageless Brain prospects what straight forward enough. It focused on “how to prevent dementia”.

This is an obvious problem/solution type hook, but it has an equally obvious drawback.

That and it sounds like a promise you have heard from every other marketer in the brain health business.

Even if you can come up with advertising that downplays the negativity it is still hard to get ads approved at places like Facebook. If they do get approved the ad lifetime tends to be short. All it takes is one person to complain about your lead generation funnel and your ad gets more scrutiny from a reviewer than it can likely withstand.

It occurred to me that we needed a more neutral hook. Not just because of the advertising problem, but because it would allow for a larger demographic to go after.

Research into the nutritional requirements for good brain health turned up a few ideas worth exploring, one of which was the influence of coffee on long-term brain health. This interested me because the demographic of coffee drinkers is a huge one. Love of coffee might be one way of drawing people in and introducing them to the topic of brain health.

There is an argument to be made that because good coffees are rich in polyphenols (antioxidants) they protect the brain against the corrosive agents (reactive oxygen species) produced as a byproduct of the high energy environment that is the brain. This assumes that polyphenols can cross the blood-brain barrier, which (because of their size) is somewhat up for debate.

So there is at least one hook here, but it’s an old one: coffee protects against brain damage.

On the other hand one can find observational studies which appear to show long-term coffee consumption provides no protection whatsoever against cognitive decline (maybe those polyphenols really are too big to penetrate the brain). Some studies even show it may increase the long-term risk for neurodegeneration.

New hook: Hold your horses, it looks like that coffee habit may actually be damaging your brain…

This is a better angle.

That’s because you are more likely to want to learn about a mistake you have made (especially one that is causing you ongoing harm) than to learn about why a past decision (in this case, to become a regular coffee drinker) was a good one. After all, you already have some idea about what lead you to make your decision in the first place, and it must have made sense at the time, even if it was something as daft as: “Everybody I know drinks coffee. So the benefits it offers must outweigh any of the disadvantages that go with it.”

As you do when you fall in love with a new hook you look for more evidence that you are on the right track. And when your nose is deep in the obscure scientific journals and the rabbit holes that waste hours of your time you will find that things turn up which often support your thesis in unexpected ways. 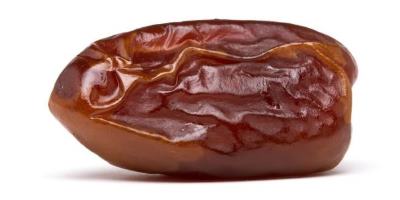 I learned about this because of a reference to a Ph.D. thesis that turned up the Palestinian tradition of a daily prescription of 3-4 dates for the improvement of memory.

This led me to the Turkish date seed coffee which is used to stem memory loss. From there I was able to track down a scientific study that revealed substances in date seeds which mimic the chemical properties of a drug known to be helpful to Alzheimer’s patients.

It was this connection that gave me the confidence to create a lead magnet for brain health based on what the average coffee drinker has no idea about the habit they engage in up to several times each day: 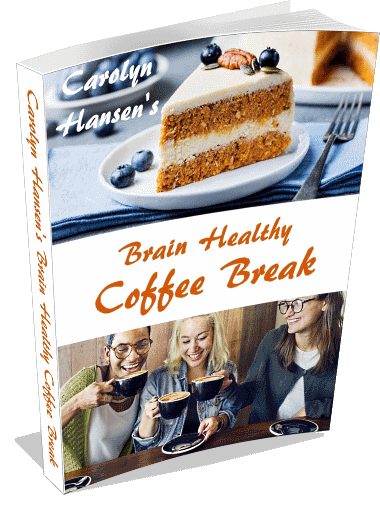 The corresponding bullets for the squeeze page used to capture leads:

Generally you do not get to pick the demographic for which you will create a lead magnet. The demographic reveals itself to you through the actions of those who either respond to your offers or shun them.

By scanning the names of the people who opt into your newsletter you can get a good feel for whether your offer has a gender bias. In the case of Ageless Brain the demographic is decidedly female. And presumably it is an older demographic because memory loss is one of the ailments we focus on.

I mentioned this to a promotional partner and he suggested he might promote our offer to his list of menopausal women. This made sense to me, but we did not have a lead magnet which had been written specifically for this group. But it seemed to me it might be a good idea to create one because menopausal women did strike me as a particularly good demographic for a program that purports to help stem memory loss.

So the next step was to determine the hook. What connects the interests of menopausal women with memory loss?

As it happened, I knew two things that immediately suggested a novel hook for this crowd.

The first observation is routine enough. Menopause in women is associated with significant weakening of the amount of circulating estrogen in a woman’s body. This in turn leads to some degree of bone loss, because the bone-building process is dependent on estrogen. 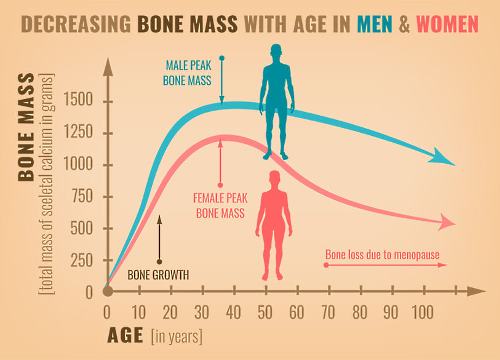 The second observation I happened to know about as a matter of chance. When I was researching the effects of bone-derived neurotrophic factor (BDNF) on the stimulation of brain cell growth I was alerted to a related hormone that plays a part in the BDNF story and which is especially noteworthy because it happens to be produce in bone.

Hormones are generally produced elsewhere in the body, so when you come across a bone-derived hormone you tend to remember it.

In this case the hormone is osteocalcin. It is produced in bone in response to exercise, which also happens to stimulate bone growth. But what makes osteocalcin so interesting to us is that it travels in the blood to the brain, crosses the blood-brain barrier, and stimulates the production of BDNF which is really the master switch for brain cell growth, differentiation, and survival.

So osteocalcin provides a bridge between menopause and brain health. There may be others, but I only needed one for the purpose of putting together a useful resource which connects weak bones to the possible consequence of that which is a weak mind: 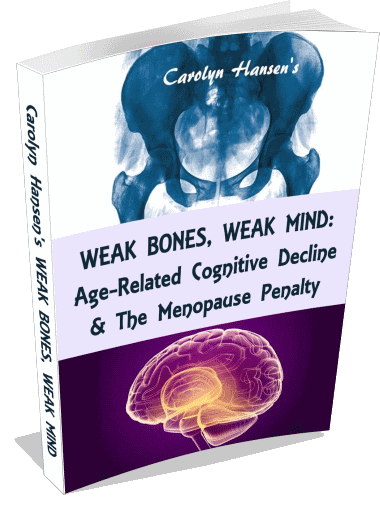 The corresponding bullets for our “weak bones” resource:

The theme for the final resource, which is “brain inflammation”, came about when it was suggested we get on the “inflammation promotes disease” bandwagon. To be fair, it is a popular theme as of this writing. But to distinguish our offer from everyone else’s we need to do a couple of things:

There’s a saying which is attributed to Louis Pasteur, the famous French virologist: “Chance favors the prepared mind.”

It means that if you have done your homework ahead of time and happen to be sufficiently knowledgeable about your area of study you are more likely to be able to connect the dots when the dots present themselves to you by chance.

In this instance when I set about to learn about the cause and effect processes which influence brain inflammation I also happened to know that a curious thing happened in the life of the client for whom I was developing this resource. Her mother had developed severe amnestic dementia in the space of literally 24 hours. One day she was capable of living her life independent of others and the next day she was not.

No definitive explanation of what prompted the change in mental function was ever offered, except that it was known to have immediately followed medical attention for a broken wrist.

Was it allergic reaction to a pain killer? Was it an unnoticed and undiagnosed bump to the head? Or was the timing just pure coincidence?

It turns out that the way we think dementia progresses, as a slow and inevitable shrinking of brain volume as the neural connections are dropped and the neurons themselves up and die on us as a result of various assaults on them is not the full story.

There is another effect at play, one that grows increasingly more threatening as the years roll by, but which need not ever reveal itself. Not unless conditions are met to unleash the danger that the threat poses. In this instance it was full-on amnesia. The physical and mental challenges posed by the broken-wrist episode were apparently enough to trigger abrupt onset dementia. At least, this is what I suspect after having identified a matching threat based on “primed microglia” in the literature of neuroinflammation. 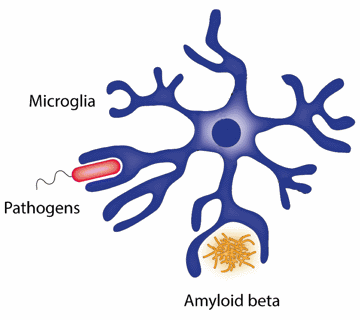 At any rate, this connection and the real life case study provided the hook I needed to develop the new resource: 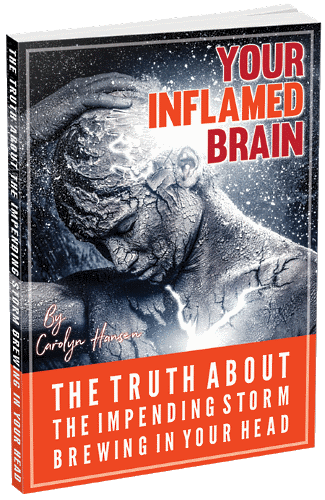 The corresponding bullets for our “inflamed brain” resource:

A key benefit of this last resource is that it should appeal to a wide demographic – anyone over the age of 40 years who has started to wonder about the long-term health of their brain.

That’s because once you reach mid life the concept of inflammation becomes less textbook and more a regular part of your life. Certainly for the majority of people who fail to take adequate protective measures for their brain and end up making poor decisions about what they eat and how they spend their (typically sedentary) recreational time.

An Email Sequence To Promote Weight Loss Formula No. 1 – A Dietary Supplement From RealDose Nutrition 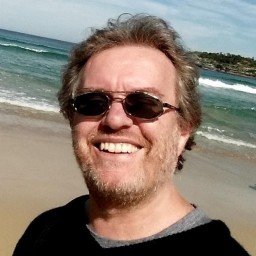